Article about my wife’s site in the Boston Globe

There was an article about startcooking.com, my wife’s project in the Boston Globe last Wednesday. Here’s the link to the article which I have also quoted here below : 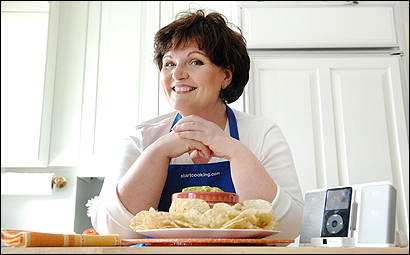 Just don’t mistake the savvy Maister, 54, for a bumpkin. She has traveled all over the world, and she posts lively videocasts on startcooking.com, a website she launched last December. “Since then things have exploded,” says Maister. “We are getting 50,000 unique hits a month. There is such a need for this.”

As the name implies, startcooking.com caters to people who want to start from the beginning. You learn, for instance, how to crack open an egg. “The goal has always been to teach the absolute fundamentals,” says Maister. “I’m a stickler for doing everything the proper way. I say, learn the rules first, then if you want to, you can break them.”

Maister, a South Hadley native, is doing something on her 3-minute videos that no one else has attempted. With the help of a computer team from Montreal â€” designers who moonlight as musicians â€” Maister shoots between 400 and 1,000 photos for each three-minute segment. The Montreal teams turns her photos into a video by converting them into “stop-motion animation,” with catchy music and kitchen sound effects like “boing” and “plop.”

The recipes are for appealing comfort food: home-cooked classics like beef stew, lasagna, and chunky guacamole. “I wanted to start with food that people actually like,” says the cook. Startcooking.com also has a tips and techniques section with advice on how to store brown sugar to prevent it from hardening, even how to load a dishwasher. When Maister chops an onion or carves a turkey, it is textbook perfect.

The vlogger came to this project from a career in home economics. After she graduated from the University of Massachusetts at Amherst, she taught cooking and sewing in high schools all over Boston, moving from one classroom to the next as home ec programs were dropped.

Between teaching and starting her site, Maister played the role of travel companion, flying first class around the world with her husband, David Maister, a consultant, author, and former Harvard Business School professor. Their Back Bay apartment is packed with art and antiques shipped home from exotic places. A carved oak sculpture of Krishna from a temple in Delhi stands guard in the foyer, Thai masks and English grave rubbings line the walls, and the powder room is plastered with wallpaper painted to look like the view from a houseboat in Kashmir.

In her free time Maister did handwork like sewing, knitting, needlepointing, and tassle making. On a trip to Estonia in 2006, she decided to throw herself back into teaching and the idea for the web site occurred to her.

It began by turning her dining room into a video studio but after a while, she decided that wasn’t working. Now she cooks and photographs the recipes from beginning to end in her tiny, impossibly clean kitchen. “We don’t use any tricks,” she says, “no white glue instead of milk.” Photographs are taken with a digital point-and-shoot camera and natural light. The ingredients are from the supermarket shelves. Maister hasn’t owned a car since the mid ’80s. She walks to the Shaw’s at the Prudential Center with her trusty grocery trolley and wheels it all home.

The website has already attracted interest from advertisers and other sponsors. Maister has been featured on the iTunes “New and Notable” food podcasts and Nokia picked up the show as content for their N-series phones.

So far, she and her husband have foot the bill for the project. “We need to start thinking about making this work economically,” she says. “The creation of these videos is no trivial expense. We decided to give it a year and see what people thought. Up to this point it has been a public service, but now there may be some opportunities.”

Meanwhile, the latest celebrity-cook-to-be e-mails new fans from all over the world. “People write to tell me that I’m teaching them everything that mom never did,” she says. “Even my own 88-year – old mother in South Hadley is learning new tricks.”

54? What has she been feeding on that you’ve missed out? Seriously though – kudos to Kathy.

What a great site! I have shared it with some folks I know that should enjoy it. Great stuff!